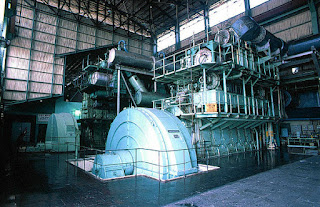 An electric generator is a device that converts mechanical energy to electrical energy for use in an external circuit. Sources of mechanical energy include steam turbines, gas turbines, water turbines, internal combustion engines and even hand cranks.
The electric generator works on the principle of electromagnetic induction discovered by Michael Faraday in 1831. Faraday discovered that the flow of electric charges could be induced by moving an electrical conductor, such as a wire that contains electric charges, in a magnetic field. The principle, later called Faraday’s law, is that an electromotive force is generated in an electrical conductor which encircles a varying magnetic flux.
Electric generators can be as large as giant machines powering the electricity grid and small enough to be portable for electric tools, construction lighting and other electrical needs when other power sources are not available.
Call Rogoz Electric for all your commercial generator needs and residential electrician services!
http://www.myazelectrician.com
Posted in arizona, contractor, electric, electrical, electrician, electricity, lighting, power, safety