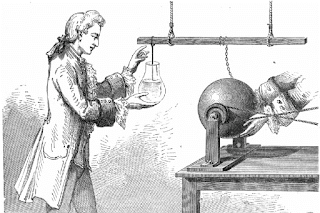 Electricity was no more than a curiosity for civilization until the 15th century, when the English scientist William Gilbert made a careful study of electricity and magnetism.
In the 18th century, Benjamin Franklin conducted extensive research in electricity. He is reputed to have attached a metal key to a kite string and flown the kite in a thunderstorm. Sparks jumping from the key to the back of his hand showed that lightning was indeed electrical in nature.
Michael Faraday, an Englishman, made one of the most significant discoveries in the history of electricity: electromagnetic induction. His pioneering work dealt with how electric currents work. Many inventions of the future would come from his experiments.
Alexander Graham Bell ushered in telephone communications with his experiments with electricity and sound. Sound levels are measured in tenths of a bel, or decibels. A unit of sound level is called a bel in Bell’s honor.
Today, electricity powers almost everything in our everyday lives. In modern times and the digital age, it is difficult to imagine life without the electricity that keeps our world running. Call Rogoz Electric at 623-363-5648 for all of your residential and commercial electrical needs in Metro Phoenix and surrounding communities!
http://www.myazelectrician.com
Posted in arizona, contractor, electric, electrical, electrician, electricity, phoenix